Six-figure investment is on horizon for Fibre 1

FAST-GROWING Moray-based digital telecoms company Fibre 1 has announced a six-figure investment by the Fidelity Group, based in Henley-On-Thames. Fibre 1 started trading in 2016 and in October the company hit the £1 million mark in contract wins.

The firm moved to Horizon Scotland offices in Forres in October 2018 due to expansion. It currently occupies three units and has extended its lease for an additional 12 months.

Now employing seven full -time staff members, it will be actively looking to add to this next year as its growth continues in 2020.

Fibre 1 has recently announced expansion, with three key figures joining the company, each bringing their own strengths which is invaluable to the growth of the business. Jan Robertson has joined as operations manager, Cheryl Rhodes as account manager and Issy Welsh as provisioning executive.

The firm believes strongly in supporting the community. It is currently the short sponsors for both League Two side Elgin City FC and Lossiemouth FC who compete in the Highland League. Both clubs have recently signed affiliate deals which will see revenues go back to each club to support their fundraising strategies and community development programmes.

Earlier this year the firm was announced as the Moray School Bank’s first corporate sponsor. Fibre 1 provide connectivity at its HQ in Craigellachie and give a percentage of revenue of all contracts signed to support this invaluable charity.

Successes this year includes the installation of a leased line to Caithness engineering firm JGC’s site at Janetstown. This project was complex and took a great deal of organisation as it needed to liaise with suppliers and co-ordinate the completion of external works, including the laying of cable along the route. These external works were required prior to the firm being able to install the fibre and take over the customer’s services. 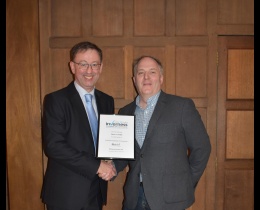 Inverness Chamber of Commerce is pleased to announce Fibre 1 Ltd as their latest Gold Partner. Chief Executive, Stewart Nicol and the Chambe...

We are going mobile!

Fibre 1 are excited to announce a new but familiar product to our ever growing product list We get requests week on week for mobile solut...

We had the pleasure of welcoming Minister for Public Finance & Digital Economy Kate Forbes MSP to meet with the Fibre 1 Team on Friday after...

request a call back: